Lady on the Bus 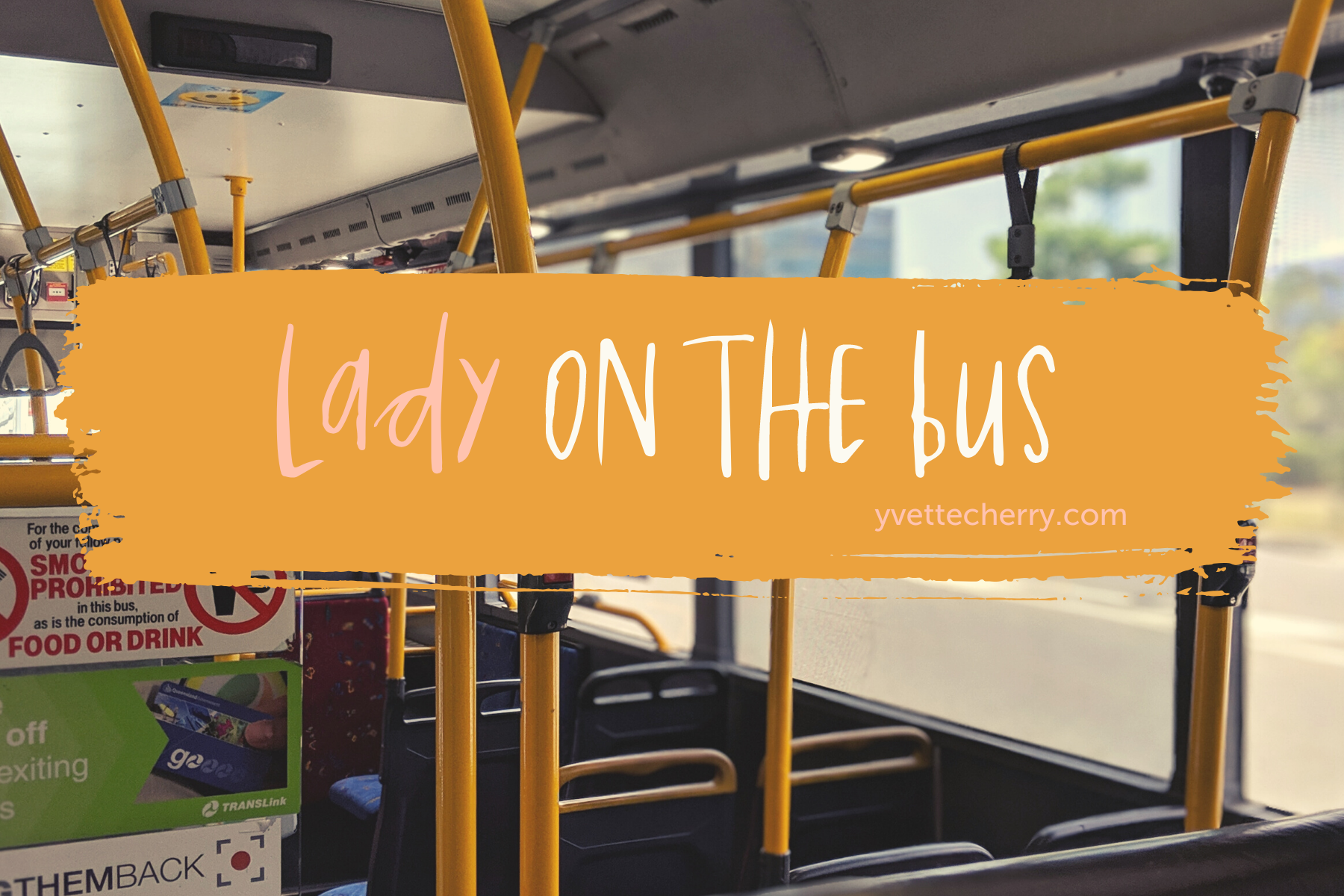 One glorious December day Sienna and I decided to take the bus to the city to ride the carousel by the river. The peaceful stay-at-home Mum + Nenna days were coming to an end. She would be off to full-time school the next year and we were trying to make the most of the time we had left together.

We chatted and took selfies while we waited on the park bench for the bus that would take us to the train station. We rarely rode the bus so this was an adventure. I wasn’t bothered by the fact that I had no bus pass and no loose change. I figured I’d just explain to the driver that I’d get an all-day ticket when I got to the station. No big deal, right?

We got on the bus and told the Indian bus driver that we wanted to go to the station. He gave me a price.

“Do you take Eftpos?” I asked hopefully. No, no he did not.

I explained that I had no cash and that I’d pay later, confident that my wholesome winning smile would be all the evidence he’d need to feel reassured of my honesty.

Unperturbed, hand on my heart, I promised him that I’d get the ticket as soon as I got there.

“If a Transit Officer gets on and you don’t have a valid ticket, you’ll get a fine,” he replied, dispassionately.

“Okay,” I said, slightly less sure. “I guess I’ll have to take my chances.”

He raised his eyebrows but waved me on. I set off down the aisle with my pig-tailed daughter in tow and plonked us into a seat.

Once seated I had a moment to look around.

I was the only white woman on the bus. There were two Aboriginal ladies sitting together, a young student- perhaps Sudanese, some elderly ladies conversing in an Asian language, a very disheveled-and-down-on-his-luck-looking-middle-aged white man on crutches and a couple of men who looked to be from India or Sri Lanka.

And then it dawned on me.

I was absolutely the only person on the bus who would ever consider that a big smile and a casual reassurance that she’d pay later would permit her a free ride.

A deep sense of shame and embarrassment started to burn in me.

I walk through this world as though I own it.

As a white, middle-class Australian woman, born and raised in WA, I live with a sense of ease that things will go my way, that the rules flex because I’m an honest person who does what she says she will do. I assume that people will trust and believe me. It was ridiculous to think that I was ever not going to pay. Even if the bus police jumped on board, I’d assumed that s/he would have just given me the thumbs up to the reassurance that I’d use my credit card when I got to the machine.

I did not get on the bus armed with the idea that I was in any way superior to anyone else. In the bubble of Vetland, anyone would have been able to do what I did.

But was that true at all?

When I looked around that bus, I was confronted with the reality that I was self-deceived. The bubble of Vetland was completely informed by my experience of being a white woman in Australia. Just because the world operated like that for me, didn’t mean that everyone else experienced it that way.

Did anyone else on the bus that morning have the audacity to assume that an honour-based system would fly?

Did anyone else on that Perth bus that morning have the experience of privilege that I had; the ability to sail through life completely unchallenged?

I saw into my own self and I felt guilty and ashamed.

The bus thing happened a few years ago. This month I learned the term for it: WHITE PRIVILEGE.

I use Instagram to learn about the world and this month I have tried to follow more people of colour who are generously showing white people that they don’t experience the world in the same way. As I read and listen, I feel the same pain that I experienced on the bus- an unpeeling of the layers that expose the injustice of the world, and how this injustice has operated to best serve me.

I’m a nice lady, I really am. And I have never been a racist person. But in the past few weeks, I have only really started to understand that not being racist is not the same as being anti-racist.

I don’t want the world to be easier for me than it is for everyone else.

God, rid me of my white lady privilege.

I also don’t want this confession to produce the kind of response that says, “Oh, Yvette, you are a nice person. Don’t worry about it. You have a good heart…”

White guilt just makes us look for exoneration… White guilt leads to me try and figure out how to relieve my white guilt and once again it’s all about me. So let’s let white guilt go.  It doesn’t work. It only keeps us silent and immobile.

I’m not asking you to pardon me. I benefit from a world that ranks and sorts people so that some have power and others don’t.
But I don’t want to perpetuate a world like that.