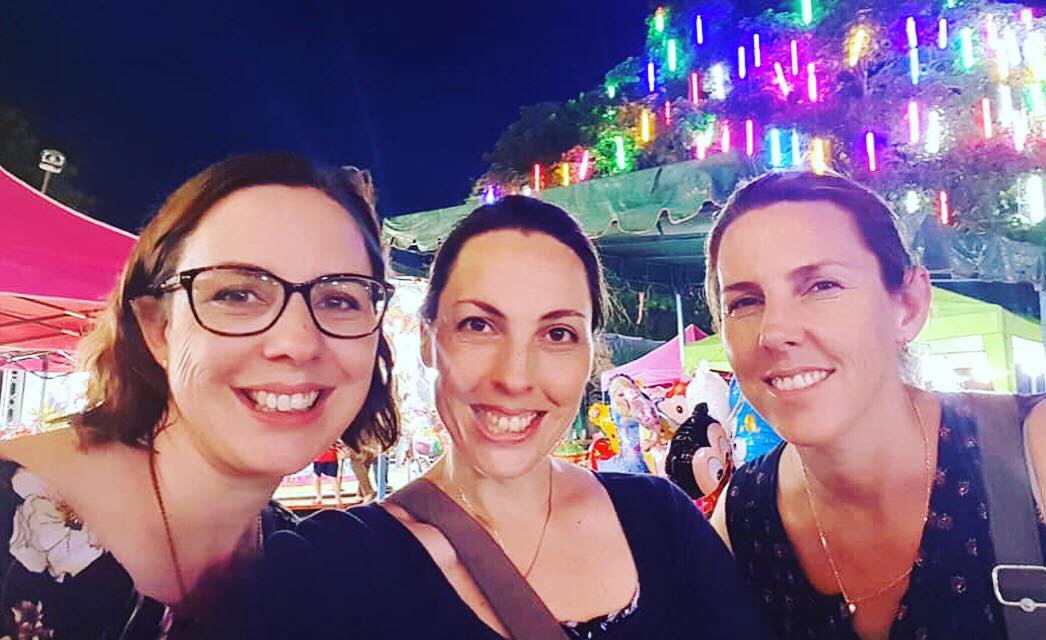 My sisters Kath and Liz are both missionaries with Australian Baptist mission agency Global Interaction. Kath, me, Liz and our other sister Jenn are incredibly close. We had a childhood both magical and traumatic so we might be closer than the average family. But I’m not sure about that- I’ve only had the one set of sisters so I don’t know if my experience of sisterhood is typical or not. People tell us me that it probably isn’t, but who’s to know?

Kath whatapp’d me before she came home from Mozambique last to tell me that she was going to pop over to Thailand to see Liz. I chatted about it with Leigh and decided that I couldn’t go- the timing was bad; I was just home from Queensland, Leigh had a lot going on at work, I had assignments due and the kids were dead tired from swimming lessons and the grind of school. They needed their mum.

But we both slept on it a few nights and then Leigh said, “Vet, you need to be with your sisters. You should go.”
I called my Dad to tell him I was going to go and he and I cried.

Being the sister of my three world-changing, incredibly smart and brave sisters is a huge part of my identity. It’s not always a good thing but it’s who I am.

Aside from the tragic lack of Jenn-ness, we’ve had some wonderful experiences in Thailand. We’ve prayed on mountain tops and sat with Liz while she’s chatted away in Thai to her friends. We’ve been to Chapel at our nephews’ school, eaten street food and wandered through busy markets. We lay awake at night while the Tokay- the gecko who lives in the ceiling, yelled at the top of his lungs into his own personal megaphone. We’ve sat in cafes and relaxed by pools.

The highlight of the trip has been seeing how amazing Liz is. I don’t speak any Thai so I can’t say how many words she gets wrong, but she can talk deeply with her friends about stuff that matters- and they clearly love her. She can organise hotel bookings and order meals, get directions, and even take a boxing lesson in the street from some rando who wanted to fight her. All in Thai. She is the bomb.

The second-best thing was that we went to the most amazing resort not far from Liz’s place for one night. It was like we were on the set of a romantic comedy… you know, the one where the couple goes on their luxury tropical honeymoon to a place you think you’ll only ever see in a movie, and then they get taken hostage by really unintelligent drug lords. Like that, but without any drug lords. Or husbands. So, so, so, so special. Our own pool, an outdoor bath, a huge four-poster bed, a towel that was folded into the shape of an elephant!!

I did a bombie into our private infinity pool.

But the trip has also had a few tough moments. Maybe I’ll tell you about them in about 11 years.

I’ve been thinking a lot about how we put the best moments of our lives on social media. The smiling, happy ones. The ones where it looks like all our relationships are amazing, and we are just shiny, happy people laughing and having fun.

Those moments are real but they are not the entire story.

I want to share my joy but I don’t want to contribute to the comparison trap. I worry that the highlight reel of Instagram that makes me look successful and carefree leaves others thinking that they must just not be doing life right.

But don’t believe that for a second. It simply isn’t true. Like Steven Furtick says, “don’t compare your behind-the-scenes with other people’s highlights reel.”

The reality is that life is still hard when it’s good, still sad when it’s happy, still complicated when your towel is an elephant. (Jenn photoshopped herself into the last one. Lol.)