End COVID For All 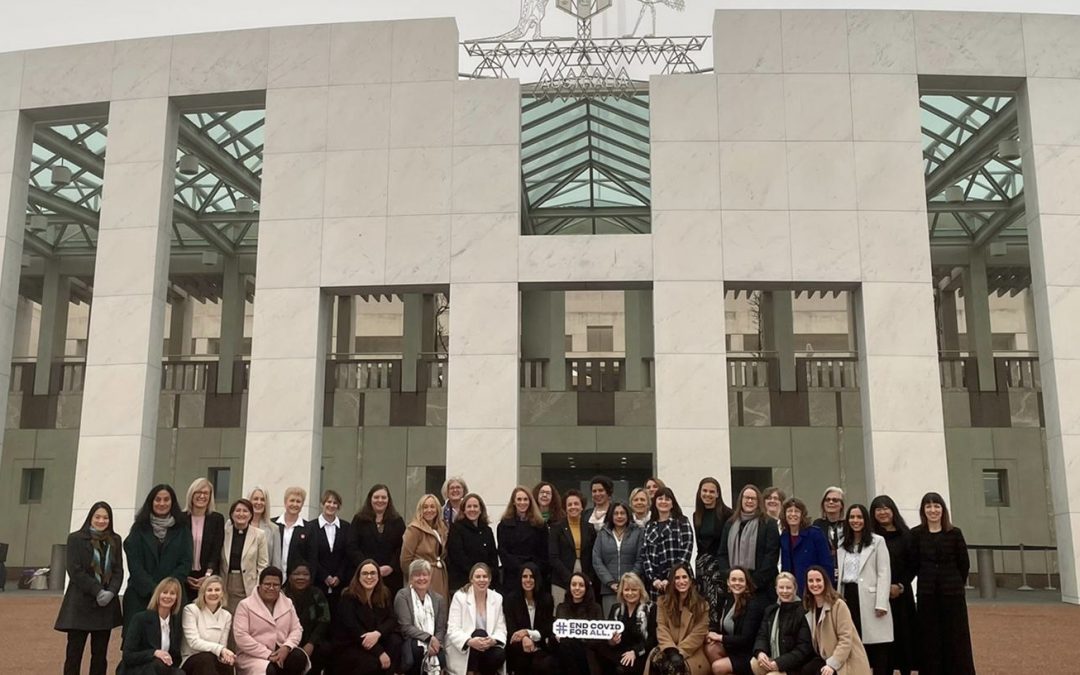 This week I had the privilege of representing Australian Baptists at the Micah Australia delegation to Canberra to speak to Senators and MPs about ending COVID for all. Led by Rev. Tim Costello, Micah Australia is a movement of Australian Christians, including individuals, churches and Christian development agencies, who collaborate to speak up for justice and work toward a world free from poverty. They prepared us thoroughly for our meetings so that we, a group of 40 women representing 12 Church denominations and 24 Christian organisations, could; speak articulately and powerfully to the issues of vaccine inequity, advocate for the world’s poorest, and represent many in our society who want the Australian Government to act with compassion, mercy and generosity.

Some of the statistics around vaccine inequity are very sad and alarming. I learned that around the world, cases are tracking at 450,000 per day, with 10, 000 deaths per day. I also learned that the World Health Organisation estimates that 75% of the world’s vaccinations have occurred in just ten countries, while only 0.04% of vaccinations have occurred in the world’s poorest nations. The world bank estimates that the pandemic will push an additional 150 million people into extreme poverty.

It is crushing to learn that because of protracted conflicts and the COVID19 pandemic, 34 million people- half of these being children- are one step away from starvation.

We had the opportunity to thank our nation’s leaders for the good they have done, and the generosity they have shown thus far. We also had the chance to ask them to take further steps by continuing to increase their giving toward vaccine programs for poverty-stricken nations in order to end the pandemic faster, and also to ask for the Government to continue to contribute to providing PPE, oxygen and expertise for these nations.

Secondly, we asked our MPs to give 150 million dollars in famine prevention package to address food security and child malnutrition in places at high risk of famine, including parts of Africa and the Middle East.

Lastly, we implored our politicians to give more generously to foreign aid. Australia is one of the 26 richest nations in the world. We give 4 billion dollars in foreign aide, and also some temporary assistance (which boosts giving to 4.5 billion). That seems really generous. But we rank at 21/ 26 on this list in terms of generosity, between Italy and Slovania. and we fall well behind Canada, New Zealand and the UK in terms of giving. We used to do better- in 2015 we ranked 14/ 26. But the Government keeps reducing foreign aid, and after these temporary packages end, our giving is projected to decline further and further.

These are stats I did not know. I am not an expert in global poverty nor am I particularly sharp when it comes to politics. But I do passionately believe in speaking up for those who cannot speak for themselves, and I sincerely want to follow God’s command to act justly, love mercy and walk humbly. Armed with brilliant information and resources from Micah, and emboldened by God’s spirit, I was able to bring my best to the meetings throughout the day.

Some personal highlights for me included;

Meeting with Patrick Gorman, MP who loved our discussion so much that he hosted us for an hour and made a video for social media advocating for the #endcovidforall campaign. He posted it to Twitter and Facebook that same day and I got to speak in it! https://www.facebook.com/PatrickGormanMP/videos/482803869453721

We met with Liberal MP Celia Hammond and when I asked her to please increase the national budget for foreign aid, she said that we need to pay back our debt and that she doesn’t want to leave a world for our children’s children where they are swimming in it. I said, “Yeh, I understand, but I think we can agree that global poverty leads to global insecurity and increased desperation. We don’t want our children’s children to inherit a more violent and insecure world either.” She looked at me and said, “that’s a really great response!” like she was proud of me. (I told her that I was also a Hammond!) #gohammonds

We met with a young Greens senator. He was a bright, articulate young guy and his mother was his personal aide. (I’d said to her, “have you worked for the Senator for long?” She replied, “all his life! I’m his mum!”) While the senator was speaking I had a sense from God that he wanted me to give him a message. I had a little argument with God. (No, God, I don’t want to. Cringey! I don’t know if he even knows you. Really, God?) I had that familiar feeling that if I didn’t speak up, I would have lost an opportunity to be God’s mouthpiece. So I said to him, “I’m Yvette Cherry, I’m a Pastor with Baptist Churches WA, and before I say what I’m here to say, I feel there’s something I need to do.” My lobby partner looked scared. Later she told me she was pretty worried about the direction I was heading in. I told the Senator that I thought there was a significant amount of “goodness” in his office. I pointed our signifiers of this goodness and commended him. I looked him straight in the eye, called him by his name and told him that God wanted him to know, “well done, good and faithful servant.”

I had a little theological debate in my head in the 15 seconds before I said it. (If the man doesn’t believe in God, is he still a servant of God? I decided yes- even if he doesn’t believe or know God created him, I believe God did. And even if he doesn’t recognise the goodness as coming from God, I know that it does. And yes, God is using him in many ways to bring goodness to the world…) I decided to be confident in my blessing of the man. After I finished speaking that affirmation over him, I saw his mum through the open door, sitting at her desk in the other room. She was beaming from ear to ear. As we left she said, “thank you so much for what you said in there.” It was my favourite moment of the day. Later I told Tim Costello about it. He said, “Yvette, you’re giving me goosebumps.”

It was an absolute pleasure and a privilege to be a part of the Micah delegation. I felt so bright eyed and energised by all that we were able to do. I pray and hope that it makes a difference.

You can learn more about Micah Australia here: https://www.micahaustralia.org/about

If you would like to play an active role in advocating to end Covid for all, please contact Micah Australia and they will help you with resources for a great conversation with your local member.