I Will Stand With You 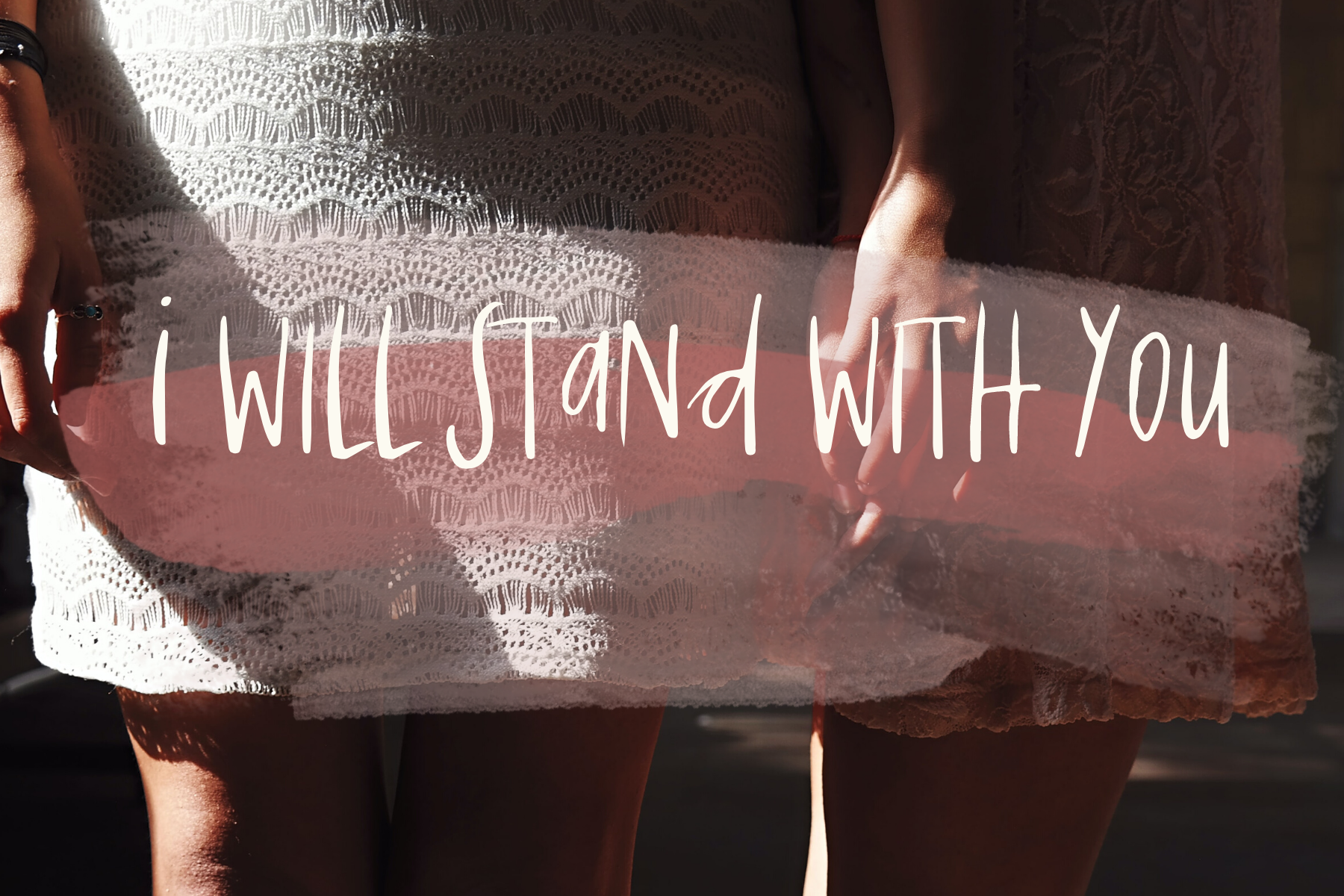 Lately, when I have a quiet moment, and my mind gets really still, the same mental image comes into focus. It is of a woman and a man standing huddled together.

It’s been happening for some months now, and I know who the people are; it’s Jesus and the woman caught in adultery. They appear in my thoughts as though they have something to say to me. I’ve decided today to get really curious about why.

Jesus returned to the Mount of Olives, 2 but early the next morning he was back again at the Temple. A crowd soon gathered, and he sat down and taught them.3 As he was speaking, the teachers of religious law and the Pharisees brought a woman who had been caught in the act of adultery. They put her in front of the crowd.

4 “Teacher,” they said to Jesus, “this woman was caught in the act of adultery.5 The law of Moses says to stone her. What do you say?”

9 When the accusers heard this, they slipped away one by one, beginning with the oldest, until only Jesus was left in the middle of the crowd with the woman.10 Then Jesus stood up again and said to the woman, “Where are your accusers? Didn’t even one of them condemn you?”

And Jesus said, “Neither do I. Go and sin no more.”

Why does God keep bringing it to my mind? What is He trying to tell me?

I think it is possible that I could identify with any three of the sets of characters in this story. Firstly, there are the teachers of religious law and the Pharisees. Maybe God is wanting to tell me not to be so judgemental toward others. That I am not without sin, and therefore I have no right to judge and condemn. That is certainly a good application, but I do not think that’s why Jesus and the woman keep meeting me in my thoughts.

Maybe it could be that I am like the woman – in great need of forgiveness for something that people want to condemn me for? Although I am not without sin (I could give you a list of the ones I’m aware of!) I don’t think this is why God keeps bringing these two before me.

When I get really still, and I hone in on the image, it’s Jesus himself who really takes up the scene. I think that it is quite possible that this story is coming to me as a guide:

Stand alongside the woman.

I think that is what God is trying to say: look at Jesus. He stood beside the woman. He loved the woman. When all the men were wanting to end her life, Jesus stood by her.

Be like that, Yvette. Stand by the woman. Stand by all the women.

It feels like a powerful calling; that to be like Jesus means to be a person who defends, protects and stands alongside women. Who doesn’t look to judge, lord power over, exclude, abuse, shame or dominate.

I know plenty of great men who are committed to seeing women flourish. But I also know that women, in many different contexts, are still being shamed, punished, excluded, dominated and judged in disproportionate ways to their male counterparts.

Kate Bowler is a historian at Duke Divinity School in the USA.  As an associate professor of the history of Christianity in North America, her research has focused on the ways Christian theology intersects with “Christian” culture. Her most recent book, The Preacher’s Wife: The Precarious Power of Evangelical Women Celebrities follows the rise of celebrity Christian women in American evangelicalism.

Bowler knows a thing or two about the ways in which Christian women in western cultures have been shamed, punished, excluded, dominated and judged.

I recently started following Bowler’s Instagram account as her Lent devotional series on IGTV was just beautiful and insightful. This led me to her podcast which I listened to while cleaning out the garage.

Bowler had done a lot of research into what causes a Christian leader to be exiled from Christian community (perhaps the modern Christian equivalent of a good old Jewish stoning). Bowler and Hatmaker were speaking about Hatmaker’s exclusion from mainstream evangelical culture, (“the Christian Machine”) after she decided to speak out for LGBTQ inclusion in the church.

Bowler explained that in writing the book she was often testing the theory, “what gets someone kicked out?” she said that when you look at men in the megachurch or big church context (think tele-evangelists and such), a sex scandal will get a male Christian leader kicked out for maybe six months before they are “gloriously rehabilitated”. A really bad financial scandal will get them kicked out for a year, but then a new board and some coaching will see them back in. Only a sex/money + press scandal will take a man out of Christian leadership for good (but she can name “so many exceptions”; men who don’t even have to go).

However, for a woman, she says, it doesn’t take a sexual or financial scandal. It just takes the appearance of impropriety, or false beliefs, or controversy…and you’re out.

I stopped still with my broom in my hand in the dusty garage when she said that.

The men, like the man who was with the woman caught in adultery, carry on.

The women are stoned.

So, I think this is what God is trying to tell me:

I’m not going to stand with the people with the rocks in their hands.

I’m going to stand by the woman.