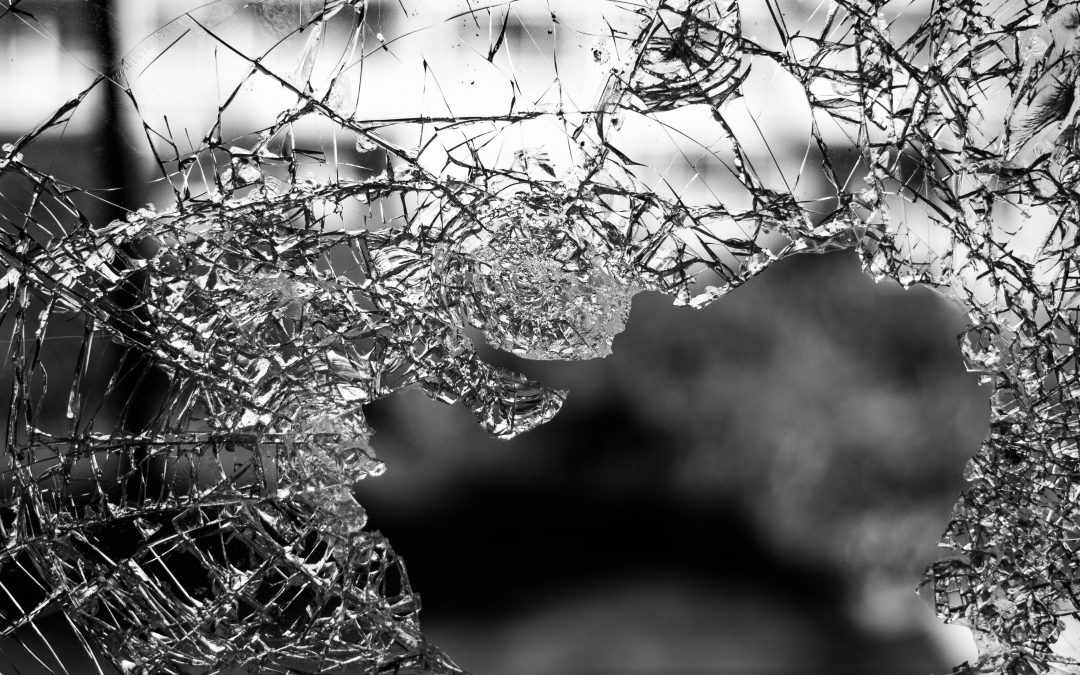 I’ve been thinking about the way, when you walk
down a crowded aisle, people pull in their legs
to let you by. Or how strangers still say “bless you”
when someone sneezes, a leftover
from the Bubonic plague. “Don’t die,” we are saying.
And sometimes, when you spill lemons
from your grocery bag, someone else will help you
pick them up. Mostly, we don’t want to harm each other.
We want to be handed our cup of coffee hot,
and to say thank you to the person handing it. To smile
at them and for them to smile back. For the waitress
to call us honey when she sets down the bowl of clam chowder,
and for the driver in the red pick-up truck to let us pass.
We have so little of each other, now. So far
from tribe and fire. Only these brief moments of exchange.
What if they are the true dwelling of the holy, these
fleeting temples we make together when we say, “Here,
have my seat,” “Go ahead — you first,” “I like your hat.”

I was waiting outside my home when the little dog in the tartan jacket came trotting down the street. I called out to him and he ran to greet me and was happy to be hoisted up into my arms and sit there enjoying the view from up there. A mobile phone number was on his collar so I rang his person. While I was leaving a voice mail (“I have your cute dog- I’ll take care of him until you get here…”) a worried man came jogging around the corner, slowing and smiling when he saw me with his pup.

I explained to him that I was standing on the street because I’d come home to discover that I’d been burgled. The police, fearing the perpetrator was still inside the house, had asked me to wait outside. Earlier I’d walked through the house while the officer was on the line. When we’d got to a closed bedroom door he said, “no, best you don’t open it. Just head outside and I’ll send someone around.” The man with the little dog expressed his sympathy and his thanks.

One of my girls had been loudly yelling, “cops are c*%$s!” when I was on the phone and I let them know that she didn’t mean a word of it, that she had Tourette Syndrome and her brain made her say things she didn’t mean. The officer made a note of it so that his colleagues would be extra gentle when they came. But the stress of the ransacked house, the shattered glass everywhere and the arrival of uniformed officers was something I didn’t think the kids needed to witness. Aunty Jenn came and took them and our puppy home.

Eventually, three police officers came. They were kind and friendly. Our house was in a bit of a state- not really because of the robbery- but because there were birthday decorations up, it was the school holidays and we had been selling and moving some furniture. One officer said, “don’t worry- we go to a lot of chaotic homes!” I laughed. She thought my home was chaotic. Her colleague quickly jumped in saying, “lived in! Lived in! It’s just very… lived in.”

Nevertheless, it is my new goal to get my house looking slightly less chaotic.

The three officers bagged up all the items that might possibly have fingerprints on them. As far as we could tell the robber had only gone into my bedroom. Our room was a total mess. Everything that could be upturned or shaken out had been. The contents of drawers and boxes littered the floor and it didn’t take me long to see that my wedding rings were gone. Sigh.

The next day more police came, and I filled out forms and spoke on the phone. Our neighbour brought over some CCTV footage of the robber coming to knock on our door. Amelia had been very frightened and had slept in our bed the previous night, but when she saw footage of the person who had been in our house, that changed. It was just a kid with an ugly mullet. Just a skinny, bogan-looking kid strolling casually as you like to our door to check whether we were home. Millie watched him and said, “yup, I’m not scared of him.”

The fact that someone came into my home and stole my most precious and expensive items has had me feeling angry and bitter. Just two days prior we had celebrated our 20th wedding anniversary. I’d had those precious rings for 20 years. And the day of the burglary was Sienna’s 9th birthday. We’d only been out for a couple of hours, at the movies, trying to create a day to remember.

Anyone who knows us knows that we’ve been through a pretty tough time lately, and to have someone violate our privacy and our security like that was just an emotional load we just do not have the energy to carry. It just felt a bit crap, really.

I think being the victim of a crime has the potential to change the way you see people. That afternoon, everyone was suspicious to me. The man looking for his dog- had he burgled my home? The people who were coming to buy the bunk bed I’d sold on Facebook marketplace- was it them? Today I even saw a young woman standing outside a house with her mobile phone in hand. Was she the lookout? I parked outside that house for a good five minutes just to make sure no one busted out running, holding a pillowcase full of someone’s precious things. The young woman gave me a quizzical look and went back inside her house.

This is not who I want to be. Sure, neighbourhood watch is excellent but I don’t want to be a person who assumes the worst of others.

I believe in kindness. I honestly do think that most people are good. When my experience of the world tells me otherwise, I want to keep lifting my eyes toward all the goodness.

We had 7 different police officers in our home this weekend and every one of them was compassionate and kind. Eventually, Georgia was there when some of them came and rather than yell obscenities at them, her tics screamed a hilarious stream of praise, affirmations such as, “oh my gosh, you are so badass!… You are amazing! I want to be just like you… Pop off, Kween!… You go, girl. Oh. you are just so great!” It was hilarious and she had the forensic team giggling. They even let her take some selfies with them.

The robber- one young dude with a terrible mullet was very unkind. He invaded our home, scared my kids, stole my best things and smashed down my door. But there were so many kind people after that.

I don’t want to miss the kindness. I don’t want the hard and bad things of the world to dim the light of all the good.

Photo by Jilbert Ebrahimi on Unsplash