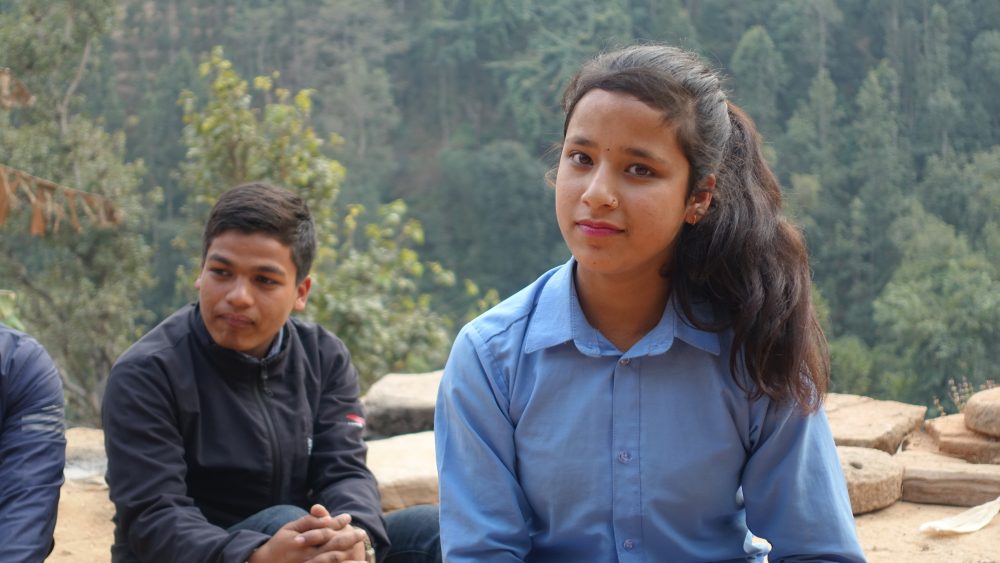 In January I travelled to Nepal with a group of amazing women (and one amazing man) to see the work of Baptist World Aid and their partner NGO, United Mission to Nepal (UMN). We travelled for 8 days through rural Nepal and visited some inspiring women and children who are flourishing in business, education and community. It was an incredible experience that I hope has changed me forever.

We had wound our way up the side of a mountain, our 4-wheel drive hugging tightly to the hillside, a sheer drop to our left. For several hours we bumped along, twisting around and around the lush hills, marvelling at the breath-taking scenery.

We had driven past bullocks ploughing tiny fields cut into the hills, women like worker ants, laden down with huge crop piles on their heads, trudging along the dusty road. Occasionally the road would open to a clearing and there would be children playing soccer on a patch of dirt, a cluster of single room homes and a small herd of goats.

We had visited a school where wriggling six-year-old boys erupted in peals of laughter when I had snapped them with my camera. It was a challenge to capture their joy and mischievous nature as their faces turned oh so serious when the camera was on them. Their teacher shushed their giggles with a stern word, trying to hide her own smile.

The school was flourishing; with solar and a library, computer labs, 20 teacher and 615 students, some of whom walked three hours, climbing steep hills and crossing rivers to get there. In places, you could see the effects of the 2015 earthquake, where big cracks ran like scars. Hopping back in the car, we stopped in on a group of teenagers who were leaders of ‘Child Clubs’ in their area. We learned from them that child clubs ran much like scouts or brigades in Australia, but in addition to drama and music, students learned about using sanitary pads, plastic and waste management, disaster risk management, awareness of the problems of child marriage and how to protect themselves from traffickers. The young people who ran the clubs, 14 to 18-year-olds, were passionate advocates of child rights. They had learned how to speak up for their needs, and when they spoke I got goosebumps. We felt we were in the presence of future world leaders. One of these remarkable young women was Binsa*, a 15-year-old girl who was sponsored through the Baptist World Aid Child Sponsorship program. After the visit with the Child Club leaders, our next plan was to visit with Binsa and her family in their home.

The drive to her home involved much stopping to clear large rocks. Clearly, the road had not seen a car in a while. When we arrived, Binsa pointed up to her house on the side of the hill. She and I began the short climb. She was nimble as a mountain goat and when I slipped on the steep climb, she reached out and grabbed my hand to pull me up. I was surprised when her little hand took mine. She had a strength that I did not possess.

Binsa called out to her family and they began to gather under the tin verandah. Her mother was elderly and seemed confused by our presence. It was explained to us that both Binsa’s parents were deaf and mute from birth, and Binsa’s father had been taken to hospital that morning. Binsa was the youngest of four children.

Binsa sat her mother down and used her hands to explain to her mother why we were there. We had the chance to ask questions about her life, and how sponsorship had impacted the family. She told us of the benefits they’d experienced, including the opportunity to go to school and be a part of the Child Clubs. Binsa told us that she had written five letters to her Australian sponsor but had only received one in return.

The mother looked on. We asked if Binsa or her mother had any questions for us and her mother asked, “did we come to them by accident?”

I don’t think she could fathom why there were seven Australian ladies sitting on her verandah. It was difficult to answer her question- to say that we had indeed come all that way to see her might have overwhelmed her. But it was not at all true that we stumbled upon their home while out for a country drive.

We didn’t stay much longer as it was clear that Mum was struggling with the number of people in her front yard. With permission, I took some photos. Binsa’s elder sister went to some trouble to make sure I got a great shot of one of the family goats.

Before we departed, I took a moment to stand at the edge of the clearing on the side of the most beautiful hill I’d ever seen. I thanked God for this woman who could not hear nor speak but could look every day at the majesty of God’s creation. *Name has been changed to protect the privacy of the child. (Steph from Baptist World Aid: “just google Nepalese girls names.” So I did, and ‘Binsa’ means ‘a woman who is fearless’ which both described who she is now and who she is becoming.